The Red Hill Community Club welcomes you to our page. We are a subsidiary of the Red Hill Historical Preservation Association.  We are people of the beautiful Lake Martin area of Alabama, as well as many living in other areas around our country, who are Preserving the Past, Providing for the Present and Preparing for the Future.  We have just passed the 60 member mark and are growing monthly.

In the past 2 years we have completed 2 major preservation projects, putting a new roof on our almost 100 year old Red Hill School building and restoring 2 former classrooms in the north wing to eventually house a museum of local memorialbilia.  See the pics of this beautiful restoration project in the N. Wing Restoration section by going to "MORE" on the main menu and clicking on that section.  We are currently putting the finishing touches on a security system for the buiding.

Our current officers are:

Our Board of Directors are:

We may be contacted at:

Red Hill School 1913
Above is the wooden building which served ast the first Red Hill School building in 1913, not too long after the area began to be called Red Hill rather than Channahatchee, the original name of the community.  Below is a listing, as best we can determine, of the students and faculty shown in this pic.

My father is the tiny runt 4th from the right on the front row.  I never knew him as he died when I was about 4.  All my uncles are scattered amongst the multitude above.

Of note is that the fellow in the bow tie, the first one on the left on the back row was my great uncle, Carl J. Kennedy, who was principle of the school for many years, and made a great impression on me throughout the eight years that I attended this school.  His wife, my great aunt Alma Lanore Grimes Kennedy, taught me in the 7th and 8th grades.
According to Ms. Irene Chambers, the brick building was there in 1936 when she attended the 2nd grade there.  She, like this editor, attended her first grade at the school at Kent, because she lived closer to that school at that time.
Her son Charles Chambers was in the 1st grade in 1966, the last year the school was open.
I suspect the brick building was built not too long after the Martin Dam was finished in 1927.
Alabama Power had a fairly large village at the dam where all the employees were housed.  I suspect they wanted a good building in which to send their children to school and funds from APC helped to make the brick building a reality.
Below is an excerpt from my first book, “Channahatchee Moon” regarding the first known beating the fire out of a kid.  If you wish to use any or all of it, you have my  permission to do so.
God bless and best regards,
Raymond Eugene Hall
To purchase "Channahatchee Moon II-Added Experiences," go to:
https://www.amazon.com/Channahatchee-Moon-II-added-experiences/dp/1500760404/ref=sr_1_1_twi_pap_2?s=books&ie=UTF8&qid=1468621447&sr=1-1&keywords=channahatchee+moon+by+raymond+e+hall
If you have a cell phone, simply download the Kindle app and download this book from Amazon Kindle for .99 cents 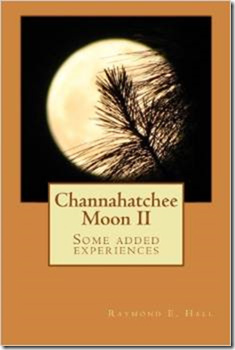 Probably the most infamous incident, for Ms. Bixie Griffith, my 5th grade teacher, within her “big stick” method of dealing with her students, was with Bobby Watkins and his firecrackers.

Bobby was in Ms. Bixie's 6th grade class in the year 1948-49, when I was in the 5th grade.  Both grades were housed the same room in the northwest corner of the school building.

To bring firecrackers on to school property was a big no-no at Red Hill School, for obvious reasons.  And to be in possession of them while on the school property was a serious offense.  Periodic warnings were issued regarding their dangers, and especially against the possession of them at school. Somehow, word got to Aunt Bixie,( she insisted that all her students call her “Aunt Bixie,”) that one of her students had firecrackers in his possession.

So she calls the class to order and puts on her best good cop persona. “Now children we know that one of you has brought firecrackers to school today, which you know you are not supposed to do.  Now I want the person that has done this to be sweet, and do the right thing, and bring them up here to me right now. If you do not, I will have to send you to the principal and it will be much worse for you.”

I think Bobby knew that several others in the class knew that he was the culprit and one of them had "ratted" on him; so he gets up and goes forward to Aunt Bixie's desk, puts his hands in both of his pockets, and pulls out two handfuls of cherry bombs and piles them on Aunt Bixie's desk.

“Now Bobby, make sure that is all you have in your possession.” Bobby reaches down and pulls out several more from the rolled up cuffs of his jeans. “Now Bobby, that was the right thing to do, and I am proud of you. But you know that Aunt Bixie has to punish those who break the rules. So go out side and break me off a limb of the willow tree in the back yard and bring it back to Aunt Bixie.”

Bobby dutifully turns around, walks out, and in a few minutes brings back in to Aunt Bixie a not very large switch for her. “Alright Bobby, lets go to the cloakroom. Children, remain in your desks. We'll be right back.”

So both of them disappear behind the walls of the cloakroom. In a few seconds we hear: “Now Bobby, bend over for Aunt Bixie like you are supposed to do.”

The next sounds are the whacks of the limb striking Bobby's butt. But then smoke starts rolling out the cloakroom doors on each end. Out comes Aunt Bixie, screaming, “Run children, run!” as she rushes out of the cloak room, out the classroom door, and down the hallway, to the rear courtyard outside entrance.

The stampede,Aunt Bixie, Bobby, and the entire 5th and 6th grade of Red Hill School finally come to a halt in the court yard at the rear center of the building.

Bobby seems to have his clothing conflagration contained, with a large charred hole in the seat of his jeans. He later pulls his sweater down underneath his jeans to fill in underneath the area where the rear jean pocket and pant seat used to be. It turned out that Bobby had a rear jean pocket filled with strike anywhere matches. When the switch, with which Aunt Bixie was striking Bobby's rear jean pocket, began to rub across the match heads, that they would truly strike anywhere was proved with an impressive pyrotechnical display!

Bobby was the youngest son of Mr. Odie and Ms. Ara Watkins. They had two sons, Clifton, the older and Bobby. Ms. Ara was a Griffith prior to marriage, and her father, Mr. Freeman Griffith, lived with them in a house on the northwest corner of what is now Red Hill Road and Castaway Island Road. He was the son of a Civil War veteran and was up in years when this incident occurred.

When Mr. Freeman found out about the incident, as he sat on the front porch of their house, smoking his pipe, he is said to have remarked: “Well, I have heard folks say that 'that kid ought to have the fire beat out of him', but that is the first time I ever knowed of it happenin!”

BOBBY WATKINS GETS THE FIRE BEAT OUT OF HIM AT RED HILL SCHOOL will always be one of my favorite stories Ray! I love it and it makes me smile. You have done a marvelous job in creating this page.

We put a rail on the north wing, get into the fire door on the porch. Well done guys. It will be great to be safe walking into the fire department access into

Thank you every one for helping to get the north wing for use as a museum.

Thanks to all you folks for taking care of this place, and especially to Paula and all of you who left the Easter decorations up for our Taunton Cousins Reunion!

This amazing web site is getting better and better! Love all the photos and fond memories. I was so happy when I saw the Red Hill School about a year ago. Keep up the good work

Fantastic job on design and an excellent site. I enjoyed browsing and reading all you have included.

I am interested to know Bixie Griffith's lineage. I have Elmore County relatives, and a niece named Bix Griffith.

We have copies of Ray's books for sale at The Tallassee Falls Museum. Excellent reading.

well done. I am a member of the Taunton Clan that moved away in the 4th grade.

Would you be related to Sam and Delma Caldwell, who lived in Red Hill when I was a boy?

I recall George talking about this on several occasions; always with a laugh. This page brings history to life for me & I only lived in Red Hill a short time. Thanks for sharing

I love quotes! Outstanding and encouraging!

I don't see your wonderful books mentioned! Where are they?

I hadn't visited your page in a while. This is truly a labor of love....such detail. I think it will mean a lot to the community!

Deborah, welcome to the neighborhood. I hope to visit you soon.